After 6 hours of sporadic bits of sleep, our bus rolled in to Sheshi Skanderbej at 4 in the morning, before the sun and people crept out of their slumber. Chris and I sat with our backpacks and boxes in a nearby café, nursing overpriced tea, to keep warm and try to pass the time before our 11 am departure flight. As I stood later in the Rines Airport I realized that the first and last time I had been inside there was when we landed in Albania, almost exactly 2 years to the day before. How much my view has changed! Albania is my home now, so comfortable and well-known to me; it strikes an emotion I could never have imagined as an incoming volunteer…

Our tiny jet plane touched down for a few hours layover in Munich which, awesomely, is well stocked with free tea and coffee kiosks alongside English newspapers. Thank you Lufthansa! To pass the time Chris indulged in a hearty German beer, braut, and salty pretzel— a mere sampling of staples from a country we could only see through the window. 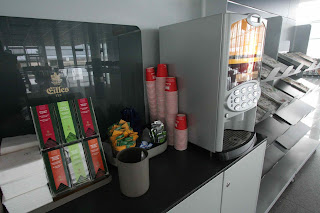 Next time you're in Munich... look for these! 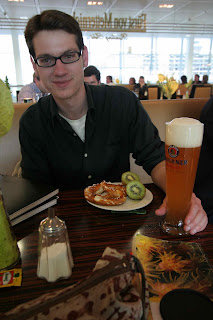 Take my picture so I can drink already!

Next stop—Madrid! Arlene and Tom were waiting, camera in tow, to meet us in the arrivals terminal late that night. Tom and Chris methodically stuffed our boxes into the rental car and took off for a 2 hour drive to Segovia, arriving at the dead of night, and checked into a hotel overlooking the ancient and enormous Roman aqueduct. 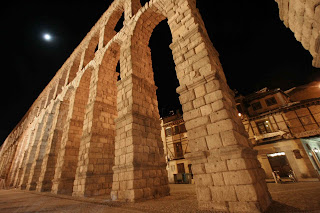 We had swerved off the highway for a minor detour in La Mancha (memorialized in Don Quixote), where a row of now-motionless windmills hover silently on a hill, jutting out of a wide valley plane. There’s a castle nearby, but it paled in comparison to the giant white structures and the harvest moon rising above the horizon… 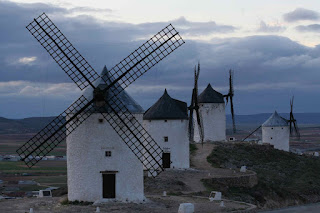 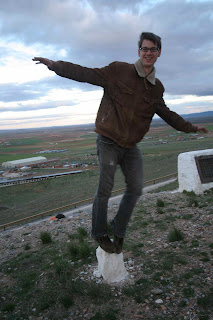 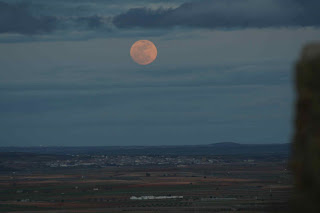 In the hotel, Tom and Arlene managed to score the honeymoon suite, and generously shared their complementary fruit platter (skewered in refined wooden sticks, packed on styrofoam, and wrapped in cellophane… ack! excuse the cynicism, I will try to refrain… ) as we excitedly chattered about our flights and caught up on the last few months of each other’s lives. 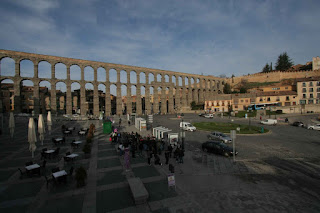 View from Arlene and Tom's hotelroom 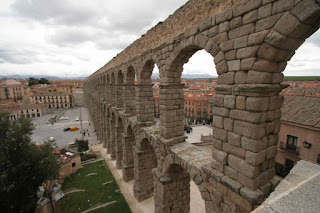 Segovia's Roman Aqueduct, over 2000 years later and it still works!

In the morning we drew back our curtains for a front row view of the aqueduct over the plaza, already teeming with people. We spent the day exploring the town, mostly wandering the Old Quarter roads that lead up to the castle. Supposedly, Segovia’s castle is the inspiration for Disney’s Cinderella castle. It looks so much like the cartoon version that it’s almost comical to me; I subconsciously expected fairy dust to start sprinkling from the sky any moment… 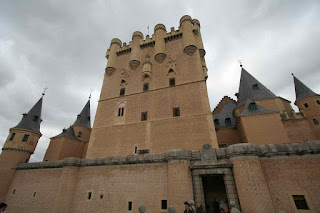 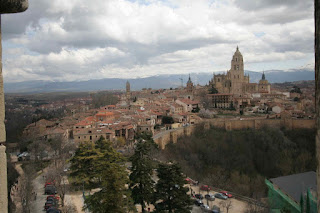 Looking back at Segovia from the castle towers

Thank goodness Arlene speaks Spanish. Tom, Chris, and I were handicapped as a bunch of foreign shmucks almost completely at the mercy of the intermittent server with whom we could relay our questions or desires. Arlene patiently translated every menu and conversation for us. After the castle excursion, we stopped for lunch at a popular restaurant offering special cuisine from the once-thriving Jewish community. Our first official Spanish meal practically punched us in the face with the truth of tapas portions and gourmet ingredients. Also that when you order suckling piglet (cochinillo asado), as Chris did, you will actually be served a baby pig chopped in half and roasted. I got lucky with the stuffed eggplant. :) 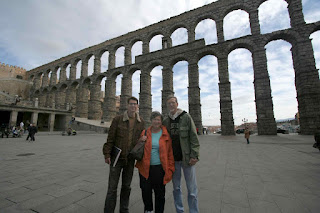 Team Hassler in front of the Aqueduct

That evening we moved to Jaen, a somewhat off-the-radar city in a good location between Granada and Cordoba. Next morning we drove to Granada, a bustling tourist destination and home of Al-Hambra, the famous palace of the Moorish royalty. The palace grounds are full of elaborately decorated buildings and gardens to wander, amazingly carved and tiled walls, fountains and pools. 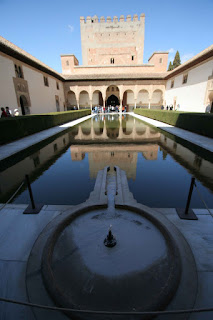 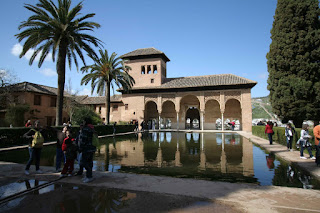 After a full day of exploring, digitally capturing everything I possibly could, and occasionally basking in the sunshine, we piled into the car and headed back to Jaen for a midnight dinner at a bustling seafood restaurant, well known for their giant steamed shrimp (or were they miniature lobsters?). We would see a lot of seafood in Spain. 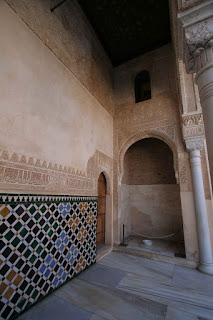 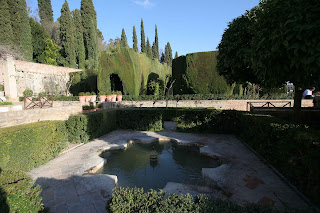 Gardens inside the Palacio de Generalife, summer palace of the Emirate of Granada

After a morning stop at Jaen’s castle and drinks in the elaborately restored parador café, our troupe crossed Spain’s southern half to Cordoba, through an endless expanse of olive groves-- did you know more than 10% of the world’s olive oil is produced in Spain?? It’s a pretty remarkable landscape, however impossible to really capture from a moving car window. :) 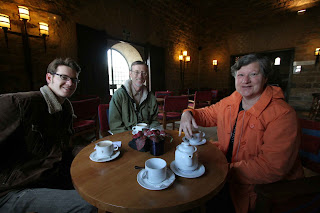 Morning fuel at the parador 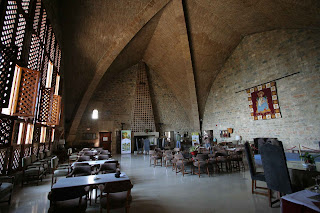 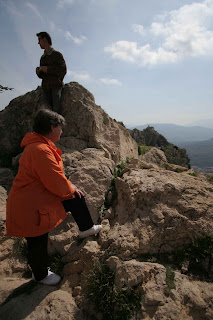 Out on a ledge, peeking at Jaen and endless olive groves...
Posted by Cjallo at 12:56 PM

Want to Learn to Speak Shqip?

Or other Peace Corps languages? Here's a connection to a massive Peace Corps Language Archive

Other blogs by wonderful people: